Over 30 years of representing businesses in the Lake Norman region and helping the voice of the lake community be heard.

The Lake Norman Chamber of Commerce, which celebrated its 30th Anniversary in September 2017, began as the North Mecklenburg Chamber. Business leaders in the late 1980's were frustrated with the lack of representation within the Mecklenburg County governance structure. They also saw a need to develop a sense of identity for the Lake Norman area. Business and elected leaders in the towns of Cornelius, Davidson and Huntersville didn't want Lake Norman to simply be considered a suburb of Charlotte, while still utilizing the benefits of its close proximity to the Queen City. The Chamber's leadership pushed for representation on the county's watershed committee, after water and sewer lines were extended to the lake, and began actively participating in the community plans which led to the towns' land development codes impacting business and commerce.

The Chamber organized a regional festival – NorthFest, which evolved into LakeFest, and after a 10-year run it simply became too successful and outgrew the Jetton Park Facilities. LakeFest was a driving force that galvanized Lake Norman's rapidly growing business and civic communities by attracting more residents, which lead to new neighborhoods and development. 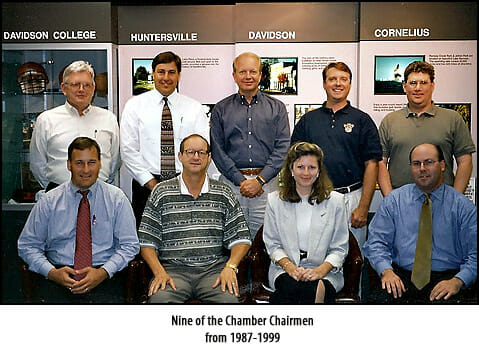 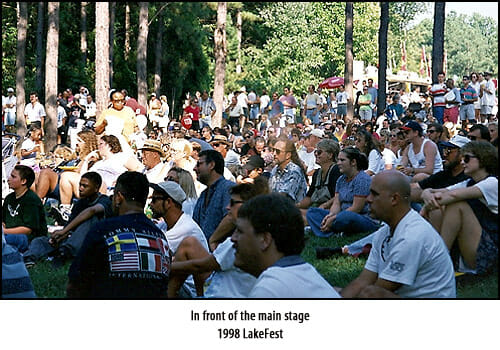 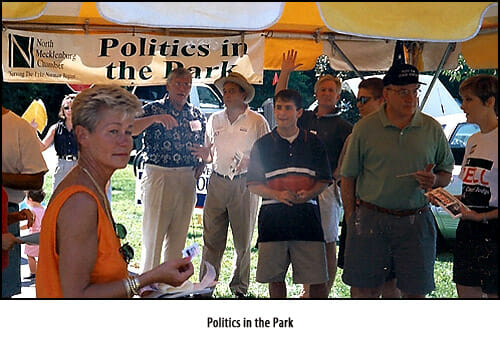 n 1999, recognizing that Lake Norman was the common thread binding together the fabric of the North Mecklenburg, South Iredell and Lincolnton County communities, the Chamber changed its name from the North Mecklenburg Chamber to the Lake Norman Chamber of Commerce. The Chamber also stepped up its advocacy on transportation issues and working with the Cabarrus Regional and Lincolnton-Lincoln County Chamber formed a Tri-County Regional Chamber Transportation Task Force which successfully lobbied for the first NC DOT Access Management Study of a multi jurisdictional road improvement project - NC Hwy 73 which involved three counties and many more towns with jurisdiction over land use. It led to the present day N.C. Hwy 73 Council of Planning that studies and recommends land use plans and improvements in that corridor.

The Chamber also weighed in on Interstate 77 improvements, the expediting of the I-485 loop and Mecklenburg County transit as well as lobbying for more classroom space and new schools for North Mecklenburg.

While its full impact would not be felt for another decade, the Chamber pushed for equal distribution of hospitality, hotel and prepared meal taxes, which now generate approximately $3.2 million annually, of which $1.6 million is returned to the North Mecklenburg towns. In the first of two public-private partnerships, the Chamber launched the creation of Visit Lake Norman—which today is responsible for generating events totaling $19 million in FY2011 and 54,844 visitors at 72 events. That travel and tourism revenue saved every household in Cornelius, Davidson and Huntersville $315.91 last year in property taxes.

In the summer of 2002, the Lake Norman Chamber which by now numbered more than 1,000 business members, contracted with the economic development consultant firm of Leak-Goforth to create a strategic plan for primary job creation and a blueprint for economic development efforts in North Mecklenburg. The results of which was another successful partnership between the towns, the chamber, and the business community in the creation of today's Lake Norman Regional Economic Development Corporation.

So what is the most significant contribution of the Chamber over 25 years? I asked that question of one of the Chamber's early founders and former Cornelius Town Mayor Gary Knox. His response – "Regionalism!" "We practiced regionalism when "regionalism" was just another word. Our kids went to North Meck High in Huntersville. We might live in Cornelius, work in Huntersville, and go to church in Davidson," said Knox. "The Chamber was the thread that stitched together the fabric of our community and in everything we did – we did it recognizing we had to support each other and work together."

Lake Norman is a great place to live, work, and visit. However, just as the generation of business and elected leaders worked to build a solid foundation for our success, we still have ways to go before we rest. We need more classroom space, employment opportunities for our citizens, and lake access for public swimming. North Mecklenburg must have a magistrate, improved transportation infrastructure, and a balanced tax structure between business and commerce and our residential tax base.

This year marks a celebration in the life of a regional chamber of commerce. It also serves as a daily reminder that the only limitations we have – are those we impose upon ourselves.

Bill Russell is the President & CEO of the Lake Norman Chamber of Commerce with approximately 1,000 members serving the business community of Cornelius, Davidson, Huntersville, and the greater Lake Norman region. He has served in that position since January of 1996.